We provide these case studies as examples of the types of surgery that we provide.  The images show surgical procedures for educational purposes that some visitors may find disturbing.

Sadie is an incredibly sweet and adorable 11 year old Jack Russel Terrier who presented to Dr. Bibevski with COR Veterinary Surgery Services for a debilitating large mass encompassing her right elbow and forelimb that had been growing for over 1 year. Due to the size and weight of the mass, Sadie was having difficulty walking, was unable to jump into her owners lap any longer and she was very painful in her wrist and shoulder joint. Recently, the mass developed open sores and began to ooze, necessitating the owners to clean and bandage the mass several times daily. After being told to euthanize Sadie, the owners sought a second opinion and eventually were referred to a board certified surgeon.

Upon meeting with Dr. Jennifer Bibevski, DVM, DACVS, a board certified veterinary surgeon, a detailed history of Sadie’s past was obtained. We learned that Sadie first developed a small, golf ball sized mass over her right elbow that was removed surgically by a general veterinarian several years ago. Histopathology (analysis from the laboratory) confirmed a diagnosis of a low-grade soft tissue sarcoma or STS which is a type of skin cancer that develops from connective tissue (see link at VSSO.org). These tend to be non-painful masses that are slow growing. Within one year, the mass returned with a similar size and appearance, and it was removed a second time. Unfortunately, this pattern of recurrence is very common with this type of tumor because the cancer cells tend to grow beyond (deep and lateral) to what you can see on the surface of the skin. In Sadie’s case, although the mass on her elbow was small initially and seemed insignificant, the cancer cells continued to spread leading to a recurrence of the mass that was larger each time. By the time that we became involved in Sadie’s case, the mass had grown to ~12cm in size and almost 2 pounds which was equilivant to her carrying a cantelope attached to her leg. 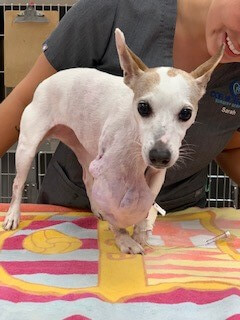 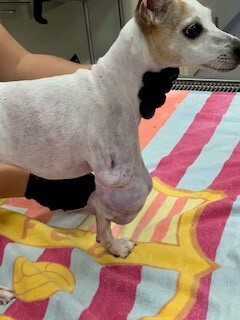 Eventually, Sadie's quality of life was significantly affected due to the sheer size and weight of the mass. At this stage, the only surgical option was an amputation of the entire front leg followed by ancillary therapy (chemotherapy or radiation) to remove any microscopic cancer cells unable to be removed with surgery. Before surgery, however, it was important to ensure the cancer did not metastasize or spread to a distant location in her body, which may have precluded surgery all together. Sadie was fortunate that although the mass was incredibly large, it was confined to her leg. She underwent general anesthesia for a forelimb amputation. Her entire leg including the shoulder blade was removed. Sadie did fantastic through anesthesia and her pain was controlled with anti-inflammatory medication and direct nerve blocks which lasted several days.

Here is Sadie after surgery resting on her bed at home. She is wearing a body suit to keep her incision covered. Since her pain was well controlled, she did not demonstrate pain related behavior such as licking or chewing at her incision and did not have to wear a hard cone or collar. She was able to sleep comfortably hours after surgery. 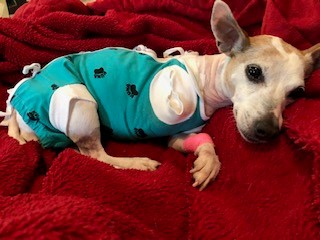 Sadie remained at home for her recovery which lasted ~10 days. Her incision healed beautifully and she was back to her previous routine right away!

Here is Sadie 1 day after surgery! Dogs tend to learn how to balance very quickly after an amputation but Sadie’s adaptation was above average! Since she was not able to use the leg very well before hand, she had already become accustomed to walking on 3 legs which made her recovery that much easier.

Sadie’s has now completed her recovery and her mom reports Sadie is back to the young spry girl that she used to be a couple of years ago before developing cancer. Her family is beyond thrilled with Sadie’s recovery. Immediately, they went out and bought multiple brightly colored squeaky balls (Sadie’s favorite) and they report that unless Sadie is sleeping or eating you never see her without one!

Video of Sadie on the couch

Please complete the form below, and we will contact you shortly.
* Required Field